Trip: A visit to Balblair (plus a review of the 1990 vintage)

Posted on 4 November 2016 by Steve Prentice

A visit to Balblair
(plus a review of the 1990 vintage)

This was originally written in 2015, and I totally forgot to post it! It was based on a visit a few years ago, but I’ve been back twice since then…

If any of you reading this have followed my trips over the years up to Scotland then you might know that Inverness is one of my favourite places, it feels like a home from home to me – there’s some definite similarities to where I live in the South West. As luck would happen to have it, I also love the whisky produced around this area… it’s not overly far to get down to Speyside, but also when heading north you’ll find some great distilleries producing fine products. 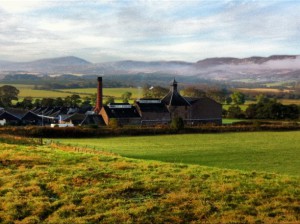 One of those distilleries is Balblair… maybe a slightly less well known name on the shelves in supermarkets, but that’s ok, they produce excellent products that us whisky enthusiasts want to keep to ourselves! For anyone that’s seen the 2012 Ken Loach film “The Angels’ Share” then you have seen Balblair as it was one of the film’s shooting locations… the picture on the right may seem familiar, it’s where the gang went camping before breaking in to steal some Malt Mill from out of the cask. 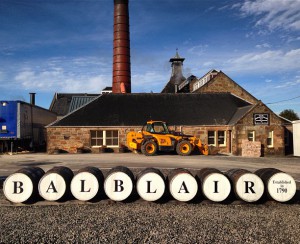 My trip there was a couple of years ago now, a chilly morning late in October which meant I had the regular visitors tour all to myself… a good way to feel like you’re getting the full VIP experience.

At that point Balblair was having a bit of work… the boiler was currently out of action, and interestingly (for a geek like me) the distillery had hired a portable boiler-in-a-lorry, who even knew such a thing existed?!

Also the visitors centre was getting a bit of a refit, which meant the staff were temporarily decanted into a portacabin which was only just keeping warm in the cold weather. Handily my ever-suffering wife had an area of the visitors centre which was finished that she could sit on a comfy sofa and nurse a nice cup of tea which was provided by the kind staff. 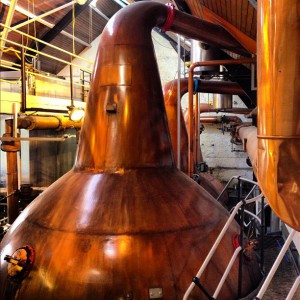 The distillery itself is a very pretty place in a quiet location… However it was originally founded a little down the road in 1790, before being rebuilt in it’s current location in 1824 to be closer to the railway line, and as you’ll see in my picture (lower down), it’s right next to it!

It’s not too large, and it’s quite a surprise to find just how much they’ve managed to cram into the space.

The water source used for much of the process is Allt Dearg, from up on Struie Hill. There are six Douglas fir washbacks, and liquid yeast is used (unlike Balblair’s sister distillery, Old Pulteney, who still uses dried yeast as it’s easier to store when the roads are closed due to snow and they can’t get any more deliveries!).

You might just notice in the picture I took at the time (above) that there were three stills in the still room; two in use, and one old one which was no longer in use (since the 1960’s)… That still has since exited the building, and I’m told there’s no current plans to replace it.

They currently produce around 1,800,000 litres of new make spirit per year. There’s seven dunnage warehouses on site, three stone and four brick with a capacity of around 27,000 casks. All the single malt stock is matured on site but also some spirit is tankered away for other purposes (blends, etc). Bottling for the single malt is all done in Airdrie.

For many years now the distillery has taken a slightly different path to most other distilleries… they produce “vintages” rather than age statement whiskies (such as a 10 year old). The vintages have published distilling dates and bottling dates, so it’s easy to work out the actual age, meaning they’re not No Age Statement whiskies. In times of shorter stock and high demand, the vintage model is one that I think many are hoping will last the test of time; many other distilleries are retiring aged statement stock because they don’t have enough aged spirit to continue. 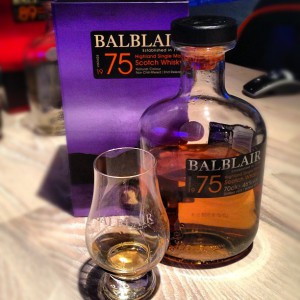 Balblair’s vintages help to avoid those problems, and instead allow the distillery to release parcels of whisky when they feel it’s at it’s best… Once the reserves for those vintages have been exhausted they can move on to new vintages that their master blender wants to show off without any particular stigma. It’s a clever strategy that’s worked well for them, and some other have started to emulate.

At the end of the tour you end up in the old malting barns which have been nicely converted into a large boardroom and tasting area… you take an immersive tour through some of the vintages of the moment with the help of videos while you’re tasting, and for me I had my first taste of the well regarded Balblair 75… A really top whisky that I’ve encountered a few more times at whisky shows, before getting a bottle for myself before the vintage was retired and replaced with something distilled more a little more recently. 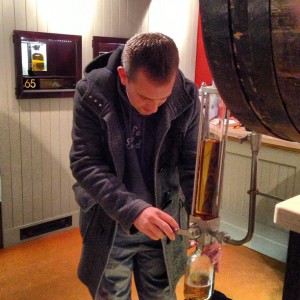 At the end of the tour you end up back in the small but perfectly formed distillery shop (where I found my wife on the sofa reading a book and drinking another cup of tea). I took the opportunity to fill my own bottle directly from a cask… an experience I can rarely manage to ignore, it’s a great way to remember your visit and keep it for posterity, opening when ready.

Just a quick note from my wife’s point of view, she’s what we call a “whisky widow”; she doesn’t drink it, but kindly drives me around distilleries when I’m touring. It’s always interesting to find out what she’s got up to, and what the local area has in terms of other things for her to do. In this case she took herself off for a walk around, finding such things as a standing stone nearby, and a very pretty thatched roofed bus shelter which turns out to be a heather hut thatched by local schoolchildren in 1993. The standing stone is called “Clach Biorach” and was erected probably in the Neolithic or Bronze Age, somewhere between around 4000 BC and 1500 BC. It was then apparently re-used some time between 500 AD and 700 AD when Pictish symbols were carved on it!

If you’re passing by, heading further up north, doing the NC500, or whatever, then you’d do well to keep some time free to pop in and say ‘hi’. 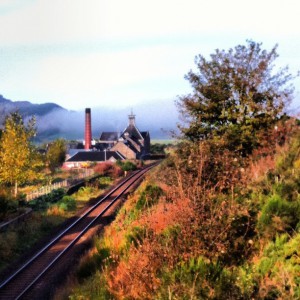 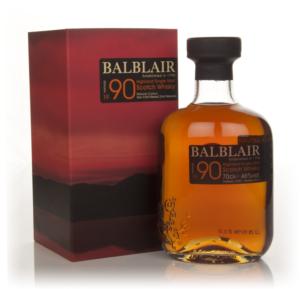 To round off this piece, let’s take a look at the 1990 Vintage release from Balblair.

Info: It was distilled in 1990 and bottled in 2013, making this a 23 year old whisky which replaces the 1989 vintage. It was matured in ex-bourbon casks for 21 years, and then for the last 2 years in Oloroso sherry butts. It’s natural colour and non chill-filtered with an abv of 46%.
Colour: A rich medium to dark gold, rusty.
Nose: Full of lovely old malt, gentle oak and leather. It’s a rich and rounded nose laden with stewed autumnal fruits and a small dollop of cream. There’s also a freshness there.
Palate: On the palate it’s thick and velvety, loads of good oils covering your mouth with gently sweet fruity flavours. There’s definite hints of cask char giving it a slight spicy bite, but only a hint, plus lots of old oaky wood.
Finish: The finish is easy, fairly long and pleasantly warming, with a fairly dry ending.
Thoughts: The long bourbon maturation makes this more than an excellent drink for summer evenings, but the Oloroso finish also makes it ideally suited to those Autumn evenings when it’s cooling down and you get your feet up in front of the telly… it’s a great winding down dram for later of an evening. It’s Balblair showing off some of it’s finest.
Extra: I have reviewed this previously here. Although my notes have changed a little, the general direction is the same, i.e. an excellent dram that’s all too easy to drink!
Available: Green Welly Stop – £89.99 / Master of Malt – £102.79

This entry was posted in Article, Review, Tours, Whisky and tagged Balblair. Bookmark the permalink.