Posted on 9 April 2015 by Steve Prentice 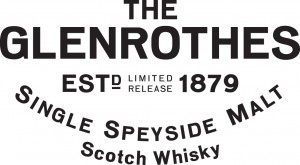 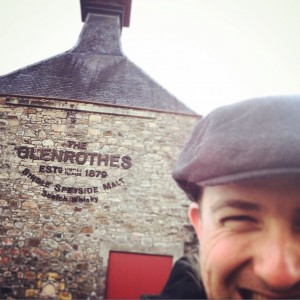 Recently I was lucky enough to be invited up to visit The Glenrothes distillery. There’s a few things I want to quickly clear up before I continue… Firstly, The Glenrothes distillery is in Rothes, Speyside…. Not Glenrothes, Fife. Secondly, it’s a brand owned by Berry Brothers & Rudd (BBR)… but the distillery itself is owned and run by the Edrington Group, who produce the spirit for and on behalf of BBR. There’s not many arrangements like that in the whisky industry!

Anyway, I start with an early 7am flight up to Aberdeen from Bristol… as ever the BMI flight excites me, I love the Embraer Regional Jets they use, plus BMI gives you breakfast (I’m usually an EasyJet flyer)! It’s the little things. Saying that, I’d already had breakfast in my B&B… and I couldn’t help but have another breakfast in the Aberdeen airport Weatherspoons on arrival… Three breakfasts! What’s wrong with that?! They’d do that in the Shire. 🙂 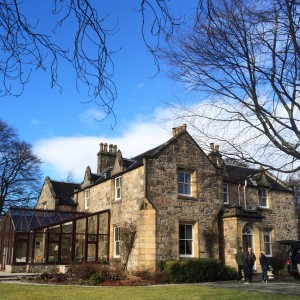 Once everyone had arrived we headed off to Rothes House, an old manse which in English terms is basically equatable to a rectory. The manse is owned by BBR and is on a hill above the village of Rothes and just a few minutes walk to The Glenrothes distillery which is below it. The manse formally being a church property highlights the history of the relationship between The Glenrothes and the church; the latter investing in the former when the distillery was being built and needed extra financing. We come back to the modern day and BBR purchased the manse from the church as it had fallen into disrepair, they renovated it and the Berry family still use it now as a home to get away to when they want, and we use it for our base for this trip. Caroline, the Rothes House Manager made us a great fish pie for lunch before we put on our coats and headed down a wooded path in the house gardens to the distillery below for a tour with Ronnie Cox, The Glenrothes Brands Heritage Director (and all round top bloke), and Eric Jefferson, The Glenrothes Visits Manager. 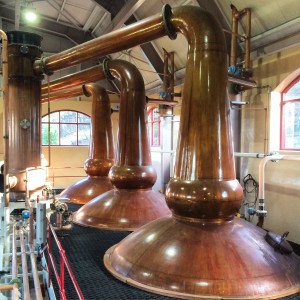 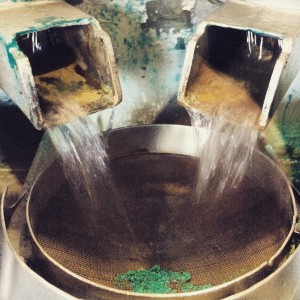 The distillery was expanded in the late 70’s… previously the still room was in the main part of the distillery, but once remodeled in 1978 the out-of-use maltings (which stopped producing around 60 years ago) were turned into what’s affectionately called The Cathedral where the 10 stills are now located (5 x wash, 5 x spirit). The process is similar to many distilleries… although there were more washbacks (a mix of metal and wooden ones) than I had originally assumed, there’s 20 of them; 12 Oregon Pine and 8 Stainless Steel. The water for the processes is piped down from local springs, the Ardcanny and Brauchhill Springs, on the hills above the distillery. They use Concerto malt from Simpsons of Berwick, running 24/7 with 9 staff; 4 waters in the mash, with a 52 hour 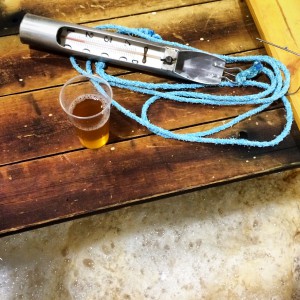 ferment using liquid yeast, producing around 5,200,000 liters of alcohol a year. That’s mostly stored on site (there’s around 50,000 to 55,000 casks) in 11 warehouses (4 racked, 7 dunnage), with some being tankered off. There’s often ducks found outside of the still house, and it’s said that the quality of the malt is often determined by the amount of ducks there are, sometimes up to 120! We tried some of the wash, a very golden and clear wash, some can be very milky but this was golden, sweet and fruity, tasty stuff. 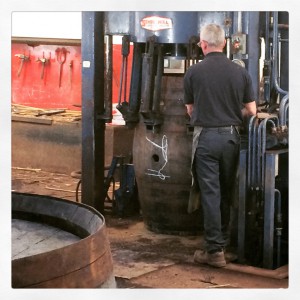 What was also nice to see was a working on-site cooperage, by far the busiest part of the distillery while we were there with many men making repairs to casks and getting them ready for filling in the on-site filling room where a slightly higher than usual filling strength is used, 69.8% abv. We learn that the Edrington Group (who run The Glenrothes) use 90% of the industry’s sherry casks… Others may query that but when you think that Edrington also run Macallan and Highland Park along with Cutty Sark and Famous Grouse then that could well be true.

We end up in one of the old dunnage warehouses where we are able to all have a go at using a valinch to extract whisky from three different types of casks. We were all invited to have a wee taste to see if we could work out which was the oldest whisky before it was revealed… I massively over-thought it and assumed there was some trickery going on and so got it completely wrong… the young sherry was much younger than I thought! 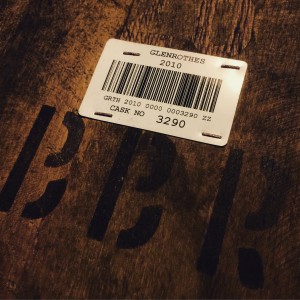 What I did note however was that a fairly well aged bourbon only offering from Glenrothes can be marvelous, and something that you rarely see… although there is now a Jewish friendly Glenrothes release (Alba Reserve) which has no Sherry cask interaction… who knew that Sherry wasn’t Kosher?! (Actually I did know that, but I can’t for the life of me remember why it isn’t). We also learn that only 2% of production goes into stock for The Glenrothes vintages. 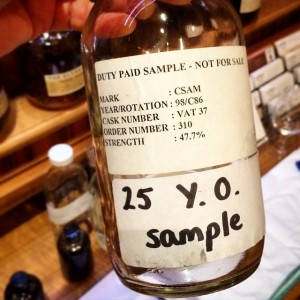 Once the the tour was over we headed to the Inner Sanctum, an old distillery building that has been turned into a tasting room, for a tasting lead by Ronnie. We trip through a fair portion of the range, and get treated to a few goodies… one for me which sticks out as a highlight of the whole trip was a dram of Cutty Sark 25yo which was an experimental batch blend that never got released, a shame as it was fabulous. Various tasting notes are at the bottom of this blog. During our time in the tasting room we discussed chill filtration, our assumption that these drams being under 46% abv must be chill filtered. We were told that to get to 43% abv (partly a strength chosen to ensure the dram is a little lighter in character) that they actually cold filter the dram, no chill freezing going on… they take it down to 4°C, which is about the coldest their warehouses go. At that point they gently filter it, and can add water without it going cloudy because they can do it slowly and don’t have to fight with other malts. I’m not one to argue, but would love to know more. 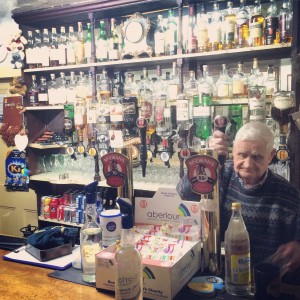 Back up at the house we take a quick trip out to the Fiddichside Inn while dinner was being prepared… I was grateful for the chance to head there as it’s a wee pub that’s always been on my whisky bucket list… Joe, the owner is reportedly 93 and may soon retire, at which point I suspect the Inn will close down. After a quick pint we return to the house and get changed ready to head down for a grand evening meal, topped off with plenty of Glenrothes 1978 in the living room by the fire – while 80mph winds whipped up outside. 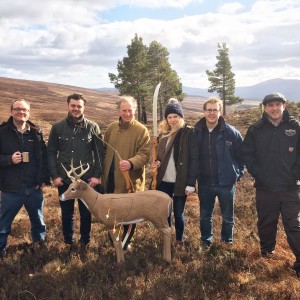 As a tradition, anyone staying in Rothes House is expected to make breakfast the next day, and are marked on how well they do. Without going in to secrets, I’m pleased to say our efforts scored us a 4.75 out of 5, pretty much a top score. Once fueled up we headed up into the mountains for some sport run by Jörg… clay pigeon shooting, archery, rifle shooting and quad bike driving… fantastic fun which put us in the spirit for a great lunch at Archiestown Hotel on the way back to Rothes House, a lovely hotel with very friendly staff, worth a visit.

We sadly pack our bags and leave (after a quick look around the house cellars and the good amount of goodies down there) to head back to the airport after what was a fabulous trip away. Many thanks to all involved, Sophie, Ronnie, etc., for a memorable experience and some great new friends made along the way.

Quick tip while I remember… many of The Glenrothes drams can be purchased in little 10cl bottles, which they call a Double Double. A great way to try their wares!

Most of these are very hastily scribbled down, but who knows, you may find them interesting and or useful… 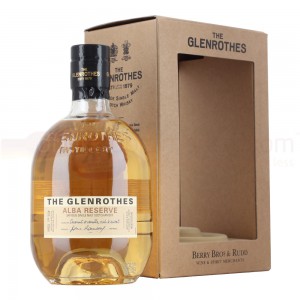 Info: It’s NAS (min 8yo max 15yo). It’s also Kosher! i.e. it’s all bourbon matured, no sherry.
Colour: Light Golden, ripe straw.
Nose: Light newish wood, honeyed malt, vanilla. Light, sweet and tasty.
Palate: Vanilla, light and woody with a citrus and coconut note.
Finish: Fairly short but sweet and tasty.
Tip: Freeze it for a flavour burst when you try it.
Thoughts: I rather like it, it’s nice / interesting to try Glenrothes without sherry in it.
Available: Master Of Malt – £39.95 (3cl taster drams available too). 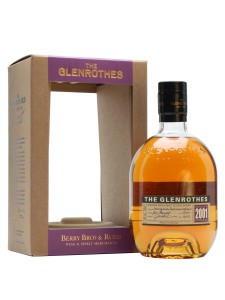 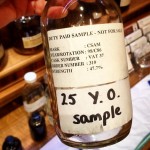 Info: 2% grain (North British), Tamdhu and Glenrothes.
Nose: Very full, soft but an old bruiser, gorgeous nose that you could smell all day.
Palate: Thick, oily and gorgeous. Sherry sweetness but not cloying. Fine, light & old, some desert island citrus.
Finish: Fab. Best dram of the trip.
Available: Not available (we finished it!). 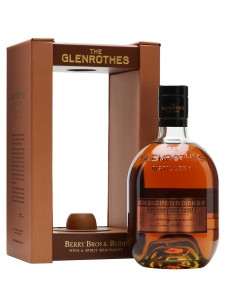 Info: NAS but a large proportion of 35yo in it.
Nose / Palate: Robust, old and grand, very nice indeed.
Finish: Long, gently sweet, sherry, leather. Not tannin lead which is good in my books.
Thoughts: Suggested to be somewhat along the lines of the Cutty above, and it wasn’t overly far off, a lovely rich dram that ticks the boxes for me, very enjoyable.
Available: Travel Retail (price unknown), but also The Whisky Exchange – £199. 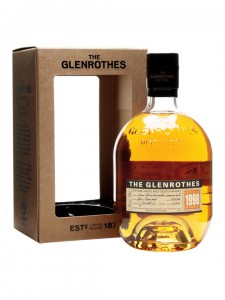 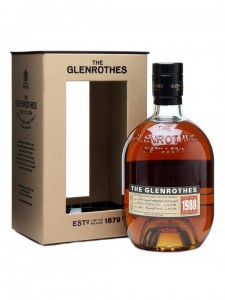 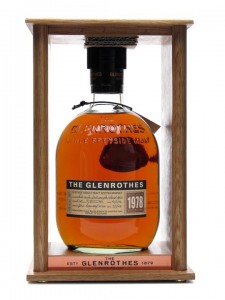 Info: Bottled 2008.
Colour: Fully golden with hints of orange.
Nose: Surprisingly light for such an old dram, however don’t be fooled, it’s deep, and gently sweet with slight seville orange citrus tones, leather and aged oak.
Palate: Medium thickness on the palate, makes it easy, but I’d wish for thicker. The gentle sweet orangey citrus tang found on the nose is there on the palate along with honey and malt, what seems to be a signature.
Finish: Very long, just like you’d expect from an old dram, hints of cask char gives it puffs of smoke.
Thoughts: I love it, but then it’s my birth year so I would. It’s a gentle grand old dram, some sherry, but not a sherry bomb. A relaxed and enjoyable well aged dram. I wish they’d bottle it at 46% when you pay that much.
Available: The Whisky Exchange – £399

This entry was posted in Info, Tours, Whisky and tagged Glenrothes. Bookmark the permalink.