Posted on 18 November 2014 by Steve Prentice

One of the newer distilleries to open of late is Wolfburn distillery, the northernmost whisky distillery on the mainland, based in Thurso. Below is a bit of info about the distillery before I take a quick look at how the spirit is maturing so far…

The first Wolfburn distillery was built in 1821 and was passed down through subsequent generations of the Smith family; in its heyday it was the largest distillery in Caithness. Production ceased during the latter half of the 19th Century – the exact date is not known.

In 2011, plans were laid to resurrect the old distillery. Construction began in mid-2012 and in January 2013 the new Wolfburn Distillery commenced production. Situated 350m from the site of the original distillery, the new Wolfburn operates in much the same way as the old: craftsmen use traditional methods to produce fine spirit, which is laid down in best quality oak casks to await the day when it is bottled as whisky. The distillery draws its water from the Wolf Burn (stream) from whence it gets its name.

In its first year of production it has beaten its annual target, producing 190,000 litres of bulk spirit – 7,000 more than initially forecast. 811 casks have been filled – the equivalent, if it was all to be bottled, of 375,000 bottles of whisky. 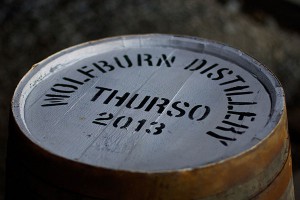 The first bottling of the next generation of Wolfburn single malt whisky is expected in early 2016.

Nose: Sweet and fruity, nearly floral, touches of licorice, plenty of barley.
Palate: Similar to the nose it’s sweet, fruity and full of barley, smoke hints.
Finish: Shortish with hints of smoke, lots of sweetness and loads of barley.
Thoughts: It’s hard to come up with too many tasting descriptors, but don’t get me wrong, I’ve tasted quite a lot of new make spirits now, and this is one of the best, cleanest spirits I’ve had the pleasure of tasting… if this is going into great casks then the whisky coming out of the other end in years to come is going to be amazing. Nearly 70% and smooth!

Info: ASB (American Standard Barrel) Cask – 200L – i.e. bourbon
Nose: Not far off the new make notes, but with hints of honeycomb, citrus and farmyard.
Palate: Already developing some thickness with hints of spice, honey and barley.
Finish: The cask is a little more apparent on the finish, it’s longer than the new make and picks up touches of cask already, some nuts coming through at the end.
Thoughts: It’s similar to the new make, but you can already see some cask influence starting to come through, and it’s already showing greatness.

Info: Quarter Cask 2nd Fill. The small casks lead to increased wood contact and therefore quicker maturation. I’m expecting this to taste a little more advanced than above.
Nose: New make barley notes are still there, but there’s increased butteriness and fruits.
Palate: Already the cask is giving an excellent helping hand to the spirit, there’s smoothness, nuts, autumn fruits, but still the new make sweetness and barley lives on.
Finish: Already there’s a medium length finish to this with some spices and sweetness.
Thoughts: The spirit here seems to be coming on nicely, halfway through it’s journey to becoming whisky, at which point I think we’ll find something really interesting. Great call on the 2nd fill cask here; with the fast maturation and strong flavours a 1st fill cask gives it might overwhelm the young spirit. There’s already a slight North Eastern Highland type quality to this.

Overall Thoughts: It’s been really interesting to see how good the spirit is, and what journey it has taken so far in the cask. It looks like it’s going to be a great whisky, worth keeping an eye out for when the time comes.

Many thanks to Wolfburn for the spirit samples. 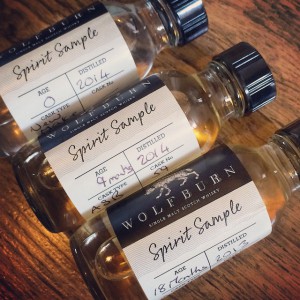 This entry was posted in Info, Review, Whisky and tagged Wolfburn. Bookmark the permalink.